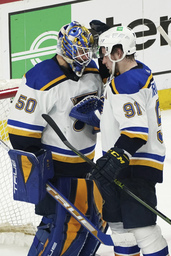 Vladimir Tarasenko and Karill Kaprizov continue their scoring duel when the St. Louis Blues host the Minnesota Wild in Game 6 of their first-round Western Conference series.

Kaprizov scored twice in Game 5 Tuesday to give the Wild a 2-1 lead, but Tarasenko responded with a third-period hat trick to give the Blues a 5-2 victory.

That sent the Blues home with a 3-2 edge in the best-of-seven series.

"Happy to win," said Tarasenko, who has four goals and an assist in this series. "Obviously happy to score, I'm not going to lie. But more happy to win."

The Blues won the Stanley Cup in 2019, but they have not won a playoff series since then. Now they are one victory away from a second-round matchup against the Colorado Avalanche, who swept the Nashville Predators in their series.

"It's not the time to think about any achievements," Tarasenko said. "The biggest thing is we won the game and let's move onto the next one. At this point with the experience in 2019, we learned that only wins matter and it's good we have a win."

Blues goaltender Jordan Binnington has won both starts since replacing Ville Husso in the nets after Game 3. His ability to handle the puck behind the net helped the depleted Blues defense corps, which regained Nick Leddy and Robert Bortuzzo in Game 5 but is still missing regulars Torey Krug and Marco Scandella due to lower-body injuries.

"(Binnington) did a hell of a job," Blues coach Craig Berube said. "I thought he made some big saves for us. I've talked about the puck play. He was excellent with that puck tonight. He killed a lot of their forecheck."

The Blues have put heavy emphasis on checking Kaprizov in this series, to no avail. His two goals gave him seven in the playoffs, which led all NHL players through Tuesday's games.

"Kaprizov just needs a little room," Berube said. "His shot is really good. And he's so strong. He's hard to handle. Heck of a player."

Through a translator, Kaprizov shrugged off his mounting goal total.

Kaprizov sets the tempo for the Wild -- and coach Dean Evason would like to see more of his teammates playing at that tempo.

"He wills the team," Evason said. "He just didn't have enough guys willing alongside him tonight. If we had 20 of him, we'd be competing our butts off a little better."

With his team facing elimination, Evason expects to see a better team-wide effort in Game 6.

"We've seen our group respond and we're expecting our group to respond," Evason said. "It's a must-win. It's desperation. We're going to play our best game, all the cliches that you want to throw out there. It's one hockey game at a time, and we'll compete our butts off and see where we sit at the end of the night."

© 2022 by STATS PERFORM.
Any commercial use or distribution without the express written consent of STATS PERFORM is strictly prohibited.